Building for a New Climate Reality

The new climate normal is here, and infrastructure in the United States is not ready to withstand it — yet. In 2021, the U.S. had 20 separate weather-related disasters, costing more than $1 billion each. It was the second-worst on record. First place goes to 2020, with 22 separate billion-dollar disasters. Total costs that year were more than $145 billion in damages. The National Oceanic and Atmospheric Administration (NOAA) reports a new record for 5-year costs in weather-related disaster events — $764.9 billion from 2017 to 2021. 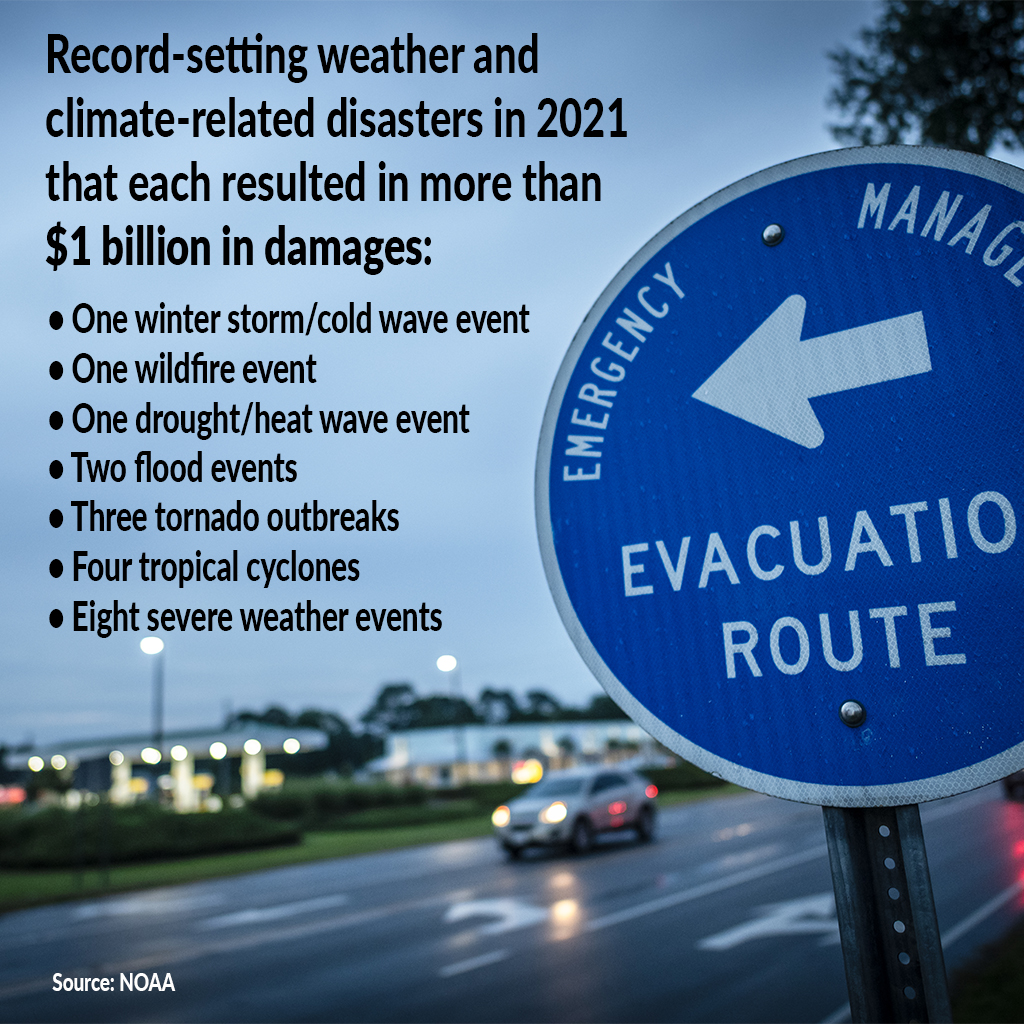 As a result of a warming climate, these events are expected to increase in frequency and intensity in the coming decades.

Yet the U.S. built environment — its roads, homes, buildings, sewage and drainage systems — were designed for a climate that no longer exists. The Earth is now 1.8° Fahrenheit (1.1° Celsius) warmer than pre-industrial times and is predicted to get even warmer by 2050. To withstand the increasing extreme weather events — heavy rainfall, severe storms, inland and coastal flooding, heat, and wildfires — new infrastructure must be designed to meet the new climate reality, and mitigation measures added to existing structures.

The 2021 Infrastructure and Jobs Act was a first step to strengthen American infrastructure stressed by climate change. Acknowledging that the built environment generates nearly 50 percent of annual global CO2 emissions, the new Inflation Reduction Act, passed by Congress in August 2022 and signed into law by President Biden on August 12, 2022,  offers substantial funding for energy-efficient homes and buildings as the nation prepares for its future climate.

The warmer the air temperature, the more moisture it can hold, resulting in heavier rainfall and flooding in some locations. At the same time, hot temperatures can also enhance evaporation and decrease snowpack and snowmelt, causing drought in other regions.

On July 26, 2022, several locations near St. Louis, Missouri, received more rainfall than on any other day on record. The extreme rainfall (up to 5 inches per hour) caused flash flooding, one fatality, and extensive damage to homes and businesses. And flash flooding in eastern Kentucky on July 28 (over 4 inches per hour) trapped many residents in their homes, resulting in 37 fatalities.

“The floods in Kentucky and extreme weather all around the country are yet another reminder of the intensifying and accelerating impacts of climate change and the urgent need to invest in making our communities more resilient to it. That’s why President Biden secured billions of dollars for climate resilience through the Bipartisan Infrastructure Law. And that’s why the Inflation Reduction Act the Senate passed yesterday is so vital. Over the long term, these investments will save lives, reduce costs, [and] protect communities …”
White House Press Secretary Karine Jean-Pierre
August 8, 2022

In the West, California had its driest year (January through July 2022) on record, while Nevada and Texas saw their second driest, and Utah saw its fourth driest. According to the U.S. Drought Monitor on August 9, 2022, half of the contiguous U.S. was in a drought. On July 22, the Rio Grande in Albuquerque ran dry. The average temperature across the contiguous U.S. was 2.8° above average, making July 2022 the third-hottest July on record. Texas endured its hottest April, May, June, and July on record. Drought conditions, coupled with extreme heat, increase wildfire risk as well. In addition, extreme heat events increase energy loads, which can lead to power outages.

In its 2021 Sixth Assessment Report, the Intergovernmental Panel on Climate Change (IPCC) warned with high confidence that “Climate change risks to cities, settlements and key infrastructure will rise rapidly in the mid- and long-term with further global warming, especially in places already exposed to high temperatures, along coastlines, or with high vulnerabilities.”

Climate-related Impacts on the Built Environment 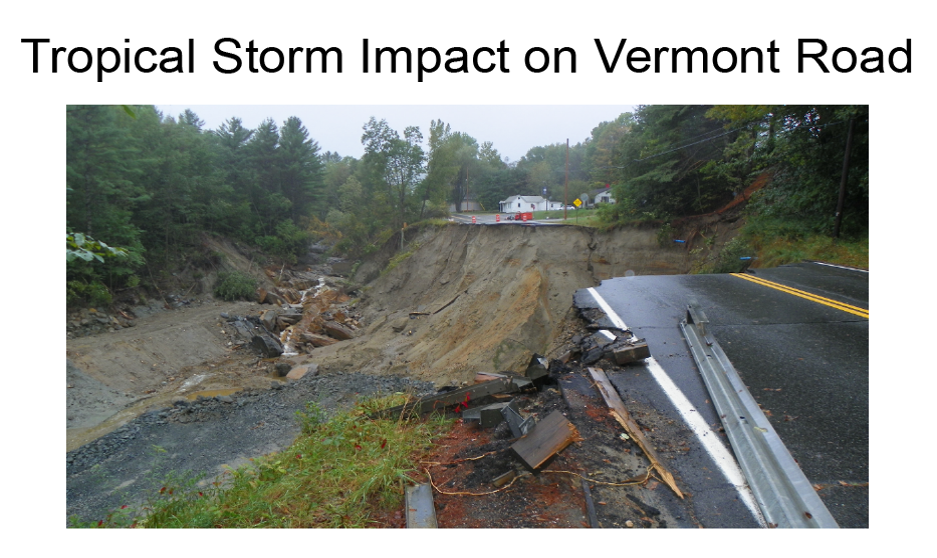 Concrete is the most widely used building material because of its affordability and durability. Yet it accounts for a substantial 8 percent of the world’s global CO2 emissions. At the Massachusetts Institute of Technology Concrete Sustainability Hub, researchers work on sustainable concrete and infrastructure science to produce alternative, low-carbon cement that also reduces heat absorption. Its researchers have also developed a building life cycle cost analysis that determines the payback period for hazard-resistant construction versus conventional designs. In some areas, the cost of repairs to a conventional building in a hazard-prone area, such as New Orleans, can exceed its initial cost. In residential homes, the payback period can be 5 years or less.

In March 2022, the Government Services Administration established new procurement standards for low-embodied-carbon concrete and environmentally preferable asphalt in new GSA building projects. This was a long-awaited and welcome step in the right direction. In its Fourth National Climate Assessment of the United States, drafted by the multi-agency U.S. Global Change Research Program, the authors found that “current infrastructure and building design standards do not take future climate trends into account,” and that it remained uncommon to incorporate climate projections into infrastructure design and building codes.

Likewise, the Government Accountability Office (GAO) warned in 2017 that “continuing to build with current standards and codes could cost the government billions of dollars in repairs, flood insurance, and disaster relief.” The GAO had found that using the best available climate information, including forward-looking projections, could help manage climate-related risks, and recommended design standards, professional education and licensing, building codes, and zoning that use “forward-looking design” to protect urban assets and limit investor risk exposure.

“To help reduce federal fiscal exposure by enhancing the resilience of infrastructure to extreme weather, the Secretary of Commerce, through the Director of [National Institute of Standards and Technology] NIST, in consultation with [Mitigation Framework Leadership Group] MitFLG and [U.S. Global Change Research Program] USGCRP, should convene federal agencies for an ongoing government-wide effort to provide the best available forward-looking climate information to standards-developing organizations for their consideration in the development of design standards, building codes, and voluntary certifications.”

As of February 2022, GAO reports that no action has been taken by NIST to convene federal agencies to date.

Meanwhile, the new Inflation Reduction Act of 2022 will fill some of the gaps. The bill includes over $5 billion in funding for low-carbon building and construction and $4 billion to improve climate resilience in affordable housing. And President Biden’s Bipartisan Infrastructure Deal will focus on climate-change mitigation and resilience as it rebuilds America’s decaying roads and bridges, and secures homes and other infrastructure.

Climate-resilient building materials and design saves lives and money. The technology and materials are available and improving every day. Along with the new climate-resilient infrastructure funding, tax incentives, and grants the Act offers, more legislation must pass that requires new building standards and zoning restrictions in keeping with our new climate reality.

How WBD Can Help Local Communities

The experts and consultants at WBD can help local governments create a Community Climate Resilience Plan. Our approach in working with city governments emphasizes local values — we help our clients develop a plan that supports their unique opportunities and challenges. We emphasize inclusivity to ensure viewpoints from diverse perspectives are considered, and that historically underserved communities and ones most affected by climate impacts will benefit from a plan’s goals and objectives.

WBD helps city governments identify grants that align with a community’s climate resilience needs and project goals and ensure efficiency throughout the application process. We offer customer support from pre-award to post-award — throughout the grant administration process. The financial and grant management experts at WBD have developed proprietary tools and processes to administer and monitor municipal funds and provide guidance for forthcoming grant opportunities.

Our WBD Climate Change Professionals (CC-P) can create a community asset and hazard inventory, a greenhouse gas inventory, and vulnerability assessments. We work with climate scientists to create a climate assessment with climate change data and models, including historical trends and future projections. WBD financial and risk analysts can determine the financial and social costs if a climate-related hazard would occur and even estimate how long it would take to recover, based on current and/or future climate adaptative measures.