LGBTQ+ Pride Month: What to Know About the History

Throughout the world, June is dedicated as Pride Month to celebrate and support the LGBTQIA+ community and recognize and remember the struggles that the community has faced over time.

Here at Washington Business Dynamics, we believe it’s important to understand how we have come to celebrate Pride and its history.

“We celebrate Pride today because of the bold actions of trans women of color who fought injustices perpetrated against the LGBTQIA+ community. They stood up for equality and freedom of love and expression. Their struggle was real and continues to this day. Until people everywhere have the ability to be their authentic selves and live free from fear or intimidation, our work isn’t done. Pride Month is a call to action as well as a celebration of the progress we have made in building a more just society. Let’s not forget the stories of these brave people. Their stories are the American story.”

WBD strives to provide a welcoming environment for everyone. We condemn discrimination of any kind. Our commitment is to build a company that ensures everyone is treated equally regardless of gender, sexual orientation, color, or faith and our differences become our greatest strength. WBD recognizes the importance of Pride Month and the impact that LGBTQIA+ individuals have had on society locally, nationally, and internationally.

The word “Pride” started to be linked with some of the annual liberation movements to counter the shaming of LGBTQIA+ community through march titles varied from year to year and city to city from the 1960s-1980s.

Pride promotes equality, self-affirmation, and visibility of LGBTQIA+ people by creating a community and safe space for people to be their authentic self.

When is Pride Month?

Pride is celebrated in June to coincide with the catalyst of the Gay Liberation Movement, the Stonewall Uprising of 1969. Although it has been celebrated for more than 30 years, President Bill Clinton officially declared June as Gay and Lesbian Pride Month in 1999. President Barack Obama expanded the observance in 2011 to Lesbian, Gay, Bisexual, and Transgender Pride Month.

On June 28, 1969, the police had raided Stonewall Inn, a gay bar in New York’s Greenwich Village, and began forcing the bar’s customers outside which created tension between the patrons, bystanders, and the law officials. The gay community in New York, fed up with years of harassment by authorities, erupted in neighborhood riots which went on for five nights.

This uprising itself grew to become a catalyst for emerging gay rights movement for organizations such as the Gay Liberation Front and the Gay Activists. Members of these groups would meet with political leaders hold public meetings to ensure the leaders were accountable.

In 2016, the area around the Stonewall Inn was designated a national monument.

Transgender individuals allowed into US military (June 30, 2016). This policy was undone on January 1, 2018, but reinstituted on January 25, 2021. The rupture illustrates the constant battle experienced by the LGBTQIA+ community in their journey to full equality and inclusion.

The Law Library of Congress has compiled guides to commemorative observations, including a comprehensive inventory of the Public Laws, Presidential Proclamations and congressional resolutions related to Lesbian, Gay, Bisexual Transgender and Queer Pride Month.

Origin of the Rainbow Flag

Three years after the two met, Milk was elected to the San Francisco Board of Supervisors, making him the first openly gay person to hold a high public office in a major American city.

Fondly known as the Mayor of Castro St., Milk had campaigned on a positive message of hope for young gay people, saying,

“The only thing they have to look forward to is hope. And you have to give them hope.”

After winning the election, Milk had challenged Baker to come up with a symbol of pride for the gay community, and 1978 Gilbert created the “Rainbow Flag” with a nod to the stripes of the American flag. His inspiration drew from the rainbow to reflect the many groups within the gay community.

In the widely known six-color flag:

Besides the well-known ‘Rainbow Flag,’ there are various other symbols used to represent the diverse communities represented in the LGBTQIA+ community. Ranging from the Transgender Pride Flag to the Philadelphia Pride Flag, there are over 20 other symbols used to represent different sexual orientations, subcultures, regional groups, and gender identities. Pride month is a celebration of all these diverse communities and people.

How You Can Participate in Pride

People from all walks of life are welcome at Pride celebrations. For many LGBTQIA+ people, Pride month is the one month of the year the community goes to the streets en masse to celebrate inclusivity and self-acceptance.

Scott Caldwell, President of WBD, said he wants the WBD team to celebrate pride month by recognizing the diversity of communities and voices in the LGBTQIA+ community.

“To celebrate being true to yourself, respecting others, and treating everyone as equals underlies the spirit of Pride Month. We celebrate everyone’s right to be their authentic selves every day at WBD, and especially during Pride Month.” 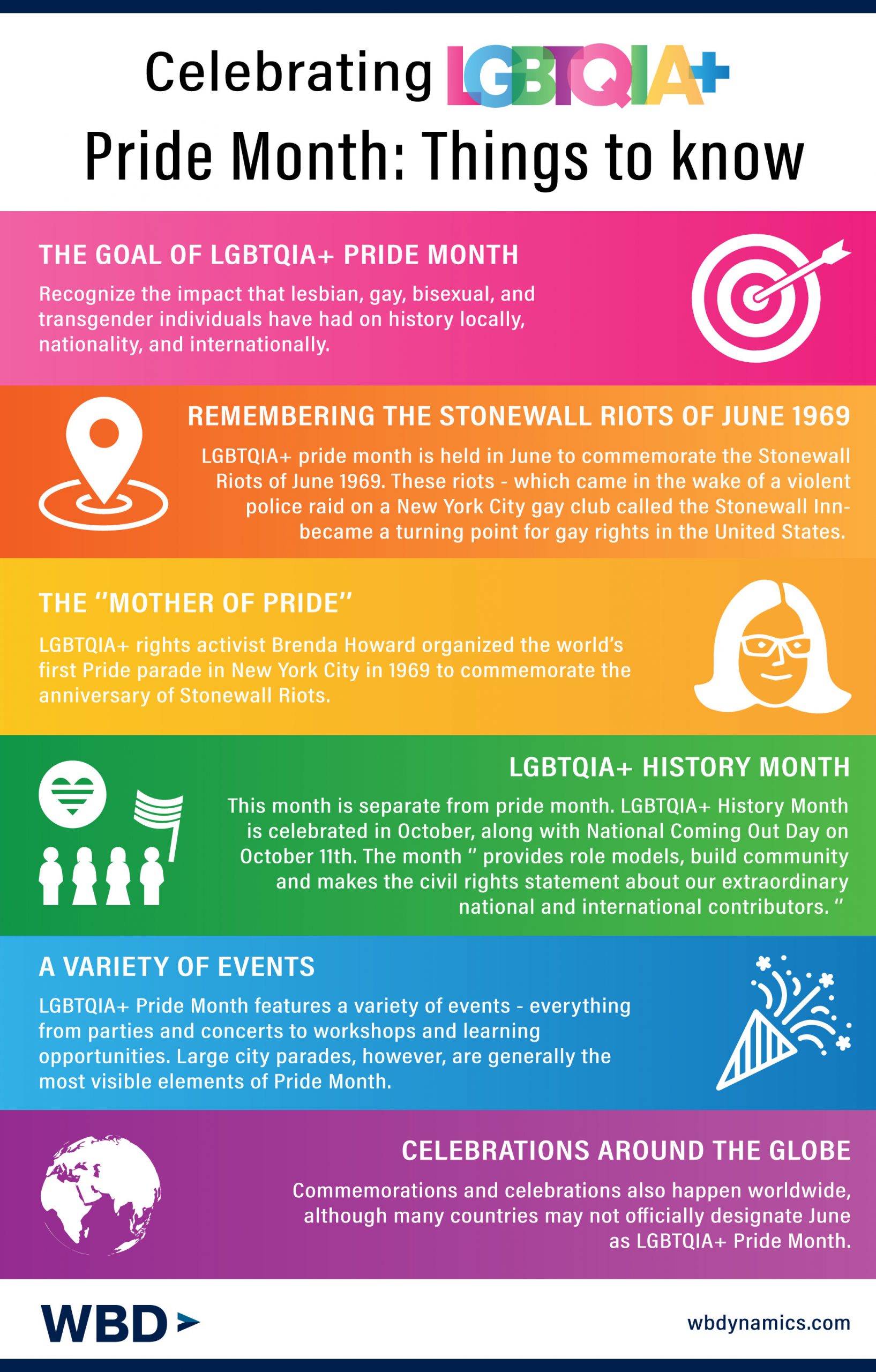