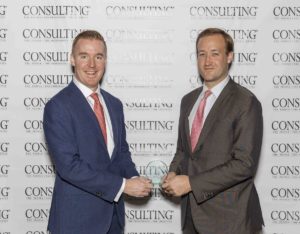 WASHINGTON — Consulting Magazine recognized Washington Business Dynamics (WBD) as the second fastest-growing consulting firm in the profession at its annual awards dinner this fall. The gala hosted 52 firms from across the globe at the University Club of Chicago with a special reception and awards ceremony.

“This award is a testament to our team’s dedication to delivering exceptional solutions,” WBD President Scott Caldwell remarked in his acceptance speech. “For the firm, this recognition encourages each of us to reflect on our growth from the beginning until present day and on into the future.”

In the nomination for the award, WBD highlighted its transformation from supporting solely the U.S. federal government to serving clientele in the international development space. With a staggering 1,361 percent growth rate, the firm attributes its exceptional success to top-tier consultants and mutually enhancing services.

“With this type of growth — an average of 233 percent — there’s no doubt these 52 consulting firms are among the fastest-growing in the consulting profession. As a result, they are shaking up the industry as growth brings opportunities,” revealed Joseph Kornik, Publisher and Editor-in-Chief of Consulting Magazine, in a press release. “This recognition and award is aimed at up-and-coming firms that too often go unrecognized because they are not necessarily the biggest firms.”

Consulting Magazine is the flagship publication of the consulting profession. In addition to publishing the latest information on consulting careers, Consulting hosts award dinners as part of its Achievement Awards series to honor leaders in the industry.

Last year, WBD was ranked the third fastest-growing veteran-owned business and 51st fastest-growing overall business in the nation by Inc. The firm plans to continue growing in 2020 through its established business lines as well as its budding international practice.